There are plenty of things that look odd in the world – and our hair can sometimes be one of them.

Why is our hair weird, you ask? Well, most of the time it isn’t (unless we’re reminiscing about the weird and wonderful, spiky 90s haircuts!). But there are some exceptions.

From cowlicks to window’s peak – there is an array of hair-related issues some males regularly deal with. And if you’re someone with a double crown – another little hair-related quirk – you’ll probably be nodding along when we say that.

For those of you who either haven’t heard of ‘double crown’, or have, but don’t really know what it is – double crown is when hair grows from two different places on the head. For example, when you look at your hair from the back, and there are two areas which seem to be radiating hair in a circular pattern – then you, my friend, have a double crown.

In this post, we’ll tell you all about the double crown – as well as the haircuts which will work for someone who has it. So, sit back, relax – and learn all you need to know.

What does having a double crown mean?

Double crown is a specific pattern of hair growth, where, instead of there being one hair crown from which the hair spirals, there are two. While it isn’t in any way alarming – having a double crown is quite unusual.

Apart from when you head to the barber, that is. Having a double crown means that, if your hair is cut too short in the back, it will most likely stick up in weird, unruly ways – resulting in an unpleasant look. The patterns of growth are quite stubborn – and it’ll take a lot of product to be able to control them. Sometimes, products won’t even be able to control these patterns – which is why, going for the right cut will be a massive help for someone with a double crown.

So, what are the cuts that suit those with a double crown? Let’s have a peek.

If you prefer short hair over long, you won’t like what’s coming: with a double crown, your hair will look better if kept long-ish. Which means that you will struggle more with hairstyles like buzz cuts and other very short cuts. However, that doesn’t mean that all you can do is have shoulder-length hair forever – having shorter hair is possible for those with a double crown! Just don’t go too short. Make sure there’s at least an inch left on top – and go for tapered, rather than very short sides.

As before – if you’re living life with a double crown, sticking to longer haircuts is a number one rule. Having longer hair helps make sure your hair grows in the desired direction, because having enough length makes styling possible. When the hair is too short, a double crown will be visible – and cause all sorts of issues when trying to make it do what you’re after. Trust us – it’s not worth it.

This medium length taper cut is ideal for men with a double crown. The length hides the confusion a double crown may cause – and makes it easier to style! Use some gel or wax for styling – and the length will help you direct any unruly hairs to the desired angle. Whether or not you go for a beard – that’s your call.

Lots of volume on top translates into unnoticeable double crown. When you are getting a haircut, it is important to cut the hairs with less strain. Cutting with tension often means cutting more than necessary – this may lead to the hair being too short and spiking up in various odd directions.

Spiky hairstyles are great for double crowns, when there is a little bit of length left to play with. When spiking hair up, you may also want to try a root spray. Root sprays are fantastic for lifting the hair from the scalp, which can help compensate for the appearance of lack of hair created by double crowns. Use a root spray with a hair dryer to create more volume and lift the hair up. Use a medium to strong-hold pomade for the spikes.

A nice and simple cut that’ll still hide a double crown. Make sure that the top of the head has enough hair on it to work with – or else the odd hair pattern will show. The sides can be tapered or faded – but ideally, they’ll still have some length – making it easier to work with. For styling this cut, you won’t need much – just a little bit of medium-hold matte pomade.

And finally – if all else fails, and your double crown is still causing you problems, give yourself a break and opt for a shaved head. Having a shaved head will mean that you don’t have to deal with daily styling problems and any odd hair that may be poking out because of a double crown. It’s a simple solution to a complicated problem. The only issue is that you have to be someone who doesn’t mind having a shaved head – and is fine with their scalp showing… 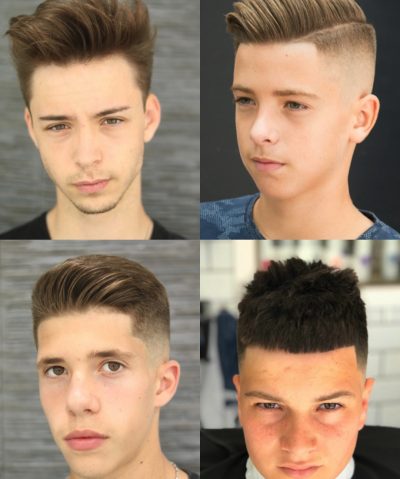