Many of us have a ‘love and hate’ relationship with our facial hair. It takes time to groom it to perfection – but we know that life without it wouldn’t be the same. It makes our faces look good – but it can get annoying when too long.

It can make us smell like breakfast all day long (who knew that a few tiny pieces of toast could do that to you?) – but it keeps our faces nice and warm in the cold months. Yup – it’s complicated. But whatever your personal history with facial hair might be, the un-denying truth is that it can look pretty damn good.

So, in the name of hairy-faced men – today we’ll show you 10 awesome beard styles that will encourage you to hide your razor in the drawer.

Ideal for men with a narrower chin, this beard needs a good amount of facial hair to turn into reality. You’ll have to not shave for about 4 weeks to get to this amount of hair – and when you’re there, get shaping (don’t be afraid to invest in the best razors in town – you’ll need things to be sharp!).

Circle beard is also often known as the ‘standard’ beard. A combo of moustache and a rounded goatee, it is one of the most common beard types for men. It could be because it looks good and requires minimal shaping effort. Or it could be because it looks tidier than many other beard styles – so you can have facial hair, and still look presentable (two elements that haven’t always gone hand in hand!). To achieve the circle shape, you’ll need to pay a visit to the salon – trust us, it’s worth it.

This is where beards start to get a little more creative. Perfect beard choice for a circular or square shape face, this style is defined by fluffy sideburns and a shaven chin (until the lower lip area). The celebrity who wears this best is, unequivocally, Hugh Jackman. To achieve this beard style, you’ll want to grow your moustache and beard until they meet – then shave your chin.

Probably the simplest – and the most impactful of all beard styles. A full beard essentially means quitting shaving and not picking up your razor for a long time. While chaps of all face shapes can go for it, it is most suited for those with triangle or diamond shape face (think Johnny Depp). It’s the manliest of all beard styles – and requires no shaping.

If you’re after a facial hair style that takes you (and everyone who sees you) on a journey back in time, then the Imperial will do just that. A moustache style that first became a trend during the Second Empire (in the 1800s), it’s a quirky look that these days would probably be deemed very ‘hipster’. To achieve this, you’ll have to fight the urge to shave for months – until you achieve a long enough tash.

Some of you may wonder how this is a beard style – surely, it’s just the ‘I’m lazy and hungover’ look? Well, you’ll be surprised to hear this, but some dudes do really go for the look. The best thing about it is that it’s probably one of the easiest beard styles to maintain. Just don’t shave your beard and moustache for 1-2 days, and you’re all set. The only issue is – as you have probably guessed it – it can look a little messy. If those are your vibes – go for it.

If you want your stubble to look a little more deliberate, then this one’s for you. Perfect for all face shapes, the medium stubble is about 3-5mm long. You might start looking a little dishevelled, but who cares? Plus, it’s a very ‘macho’ look – and who doesn’t like the ‘macho’ look?

And now – meet the long stubble! We’re not going to lie – it is more difficult to maintain compared to the short and the medium stubble, as you’ll have to trim it more often to get rid of stray hairs that don’t need to be there. Still, if you asked for our honest opinion… we like it more than the short and the medium. Why? Because it looks like a proper beard – yet isn’t as overpowering as a full beard. The way to achieve it is not to shave for a week or two, but you gotta remember to trim the stray hairs whenever they appear (and, generally, keep it nice and trimmed).

A recent phenomenon, the Bandholz beard is a beard named after Eric Bandholz – the owner of Beardband. It’s an impressive style which consists of lots of hair and volume – and will take a while to achieve (expect to grow it for about 6 months). The good bit? It’ll look awesome. The annoying bit? Everyone will want to touch it. Err, get your mitts off my beard!

Similar to the long stubble – but slightly longer, short beard with moustache is another popular beard style. It’ll work best with ovals and squares out there – but don’t let us discourage you from trying it if you’re a square! How to grow it, you ask? Keep your beard down to almost your jawline and allow the sideburns to grow into it. Shape the beard to the shape of your chin – and allow your moustache to grow in the shape of an inverted ‘u’. 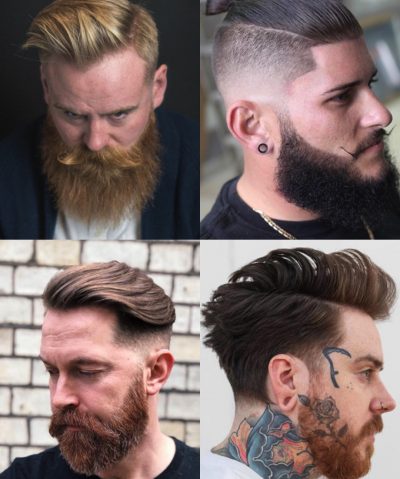